AND NOW ANOTHER MOVIE FOR YOUR BUCKET LIST: SINCE YOU WENT AWAY (1944) 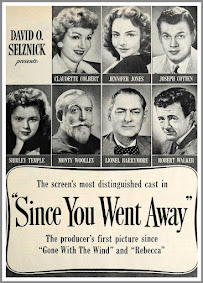 And now another wonderful film for your movie bucket list:  David Selznick's 'SINCE YOU WENT AWAY".

Since You Went Away is a 1944 American epic  about the American home front during World War II that was adapted and produced by David O. Selznick from the 1943 novel Since You Went Away: Letters to a Soldier from His Wife by Margaret Buell Wilder. The music score was by Max Steiner....

The film is set in a mid-sized American town, where people with loved ones in the Armed Forces try to cope with their changed circumstances and make their own contributions to the war effort. The town is near a military base, and some of the characters are troops serving Stateside. Though sentimental in places, Since You Went Away is somber at times about the effects of war on ordinary people. Some characters on the homefront are dealing with grief, loneliness, or fear for the future. The cast is wonderful; here's a sample: 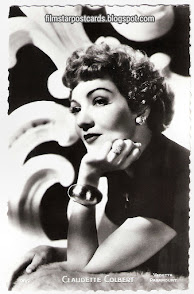 You can check out the trailer for the film on YouTube here.

IT'S ALSO AVAILABLE ON AMAZON HERE.  Put this one on your bucket list.

SEE MORE MOVIES FOR YOUR BUCKET LIST AT THE LINKS BELOW: