1985: ELENI, A FILM FOR THE BUCKET LIST & A TIMELY MESSAGE STILL RELEVANT TODAY 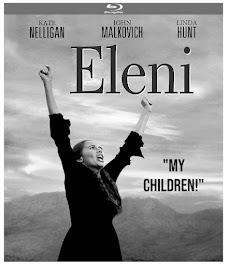 Another film for the bucket list....Eleni.

It is not a perfect film, but the plot-line and acting is nothing short of superb---and all that makes up for any deficiencies in direction.

The film is told in a flashback format with Gage, played by a very young Malkovich, now living in the United States, returning to his native Greece to solve the mystery of his mother's death when he was a child.

The film looks back to the effect of the 1940s Greek Civil War on the remote Greek region of his childhood upbringing.  He investigates what happened to his mother after Communist guerrillas of the Democratic Army of Greece (ΔΣΕ) invade the village of Lia.

Determined to protect her children from Communist indoctrination--in school, at work, from the blurring of traditional gender roles and so much more---she makes the ultimate sacrifice.

Both the book and the film are highly recommended.

MORE SUGGESTIONS FOR YOUR MOVIE BUCKET LIST AT https://everythingcroton.blogspot.com/2021/09/and-now-barefoot-contessa-mgm-1954.html