ON THIS DAY IN 1960, SPARTACUS PREMIERED IN NYC 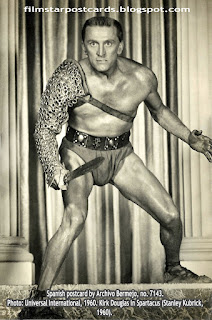 ON THIS DAY in 1960 "Spartacus", directed by Stanley Kubrick and starring Kirk Douglas and Laurence Olivier, premiered in NYC

If you have not yet seen this film, CORRECT THAT ERROR! It is one for the bucket list.  Directed by Stanley Kubrick and written by (blacklisted/CANCELLED) Dalton Trumbo, it is based on the 1951 novel of the same title by Howard Fast. It is inspired by the life story of Spartacus, the leader of a slave revolt in antiquity.....

Starring a simply amazing Kirk Douglas in the title role with a very strong performance by Laurence Oliver as Roman general Marcus Linius Cassius, the film also features Peter Ustinov, John Gavin, Jean Simmons, Charles Laughton and Tony Curtis....but really the entire cast---right down to the most minor roles--are all quite good.....the direction is superb...read more about it here.

YOU MAY ALSO HAVE AN INTEREST IN THESE POSTS FROM OUR FRIENDS AT EUROPEAN FILM STAR POSTCARDS: