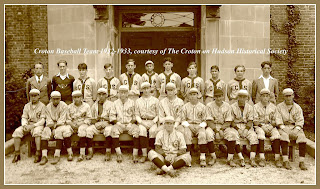 We stopped by THE CROTON HISTORICAL SOCIETY today where everyone was working hard on the new exhibit, sorting new material, and more—to take a look at some baseball and basketball photos from the village’s illustrious sports history. The society has an excellent archive, all of it handy at a moment’s notice. Kudos to the volunteers for their ongoing efforts to preserve this part of Croton’s heritage. They do it so well!

All that said, we made a lot of copies, and took lots of photos of photos, for future editions of Croton Memories 2012 here at EverythingCroton—some we will restore and “bring back” from the land of “fade” whenever possible. We're starting with the 1932-1933 Croton baseball team, click on the photo. Pictured in the back row, left to right: Loren Campbell, Sam Parsons, Harold Adams, Frank Gildersleeve, Carl Anderson, Jim Loconto, John Fryer, Carl Sherbloom, Art Frank and in the front row left to right: Harold Eckloff, Carmen Picciano, Art King, Mike Gerardi, Francis LaBake, Bill Porchmouth, Albert Rozell, William Fleming, George Kingsley, Winslow Kimball, Harry Morton. In front is Eben Slaving.

Stay tuned for more Croton Memories 2012. To see past editions:

CROTON MEMORIES 2012 – WRESTLING – WHERE IT ALL BEGAN http://everythingcroton.blogspot.com/2012/01/1958-croton-wrestling-where-it-all.html

YOU CAN ALSO SEE AN INDEX OF THE 2011 CROTON MEMORIES SERIES HERE http://everythingcroton.blogspot.com/2011/10/index-of-2011-croton-memories-series.html

The Croton Council on the Arts is sponsoring a concert of The Chamber Players of Croton on Sunday, January 29, at 2:00pm at the Unitarian Fellowship, 2012 Old Albany Post Road, Croton. The concert is given in remembrance and celebration of the life of Stephen Morris, the founder of the ensemble and its guiding spirit until his untimely death last October.

Stephen Arthur Morris was born in 1949 to Benjamin and Rachel Morris of Glen Cove, Long Island. He showed early promise in both academics and music. Both were fulfilled in his lifetime. As a musician, Stephen first studied piano with his mother, an accomplished musician, and later took up the flute as his favorite instrument. He was accepted into the prestigious Curtis Institute, where he studied under William Kincaid, later Julius Baker, two legendary flautists. Stephen was also accepted by the University of Pennsylvania on a full academic scholarship. Graduating Summa Cum Laude, he then entered Albert Einstein College of Medicine. In 1979 Stephen was awarded both a Doctor of Medicine degree and a Phd. in Pharmacology, becoming the first student to be granted both degrees at that institution.

While Stephen continued to play the flute, his professional career was in medicine and pharmacological research.

The first half of his professional life was spent practicing medicine at Columbia Presbyterian Hospital in New York, where he was also an Associate Professor of Medicine. Later, in the mid-1990's, he turned his attention to the pharmaceutical industry, dedicating his talents to developing life-saving drug therapies. At the time of his death, he was Senior Director of Clinical Research at Progenics Pharmaceuticals, in Tarrytown.

After moving to Croton-on-Hudson in 2008, Stephen became involved with the Croton Council on the Arts. He quickly distinguished himself by establishing The Chamber Players of Croton-- a talented and dynamic group of chamber musicians, but he was interested in promoting all areas of the arts. As Vice President of the group, he envisioned a newly-flourishing Council that would become a strong presence in our community.

To all his endeavors he brought a keen intelligence, irrepressible spirit, and infectious sense of humor.

Stephen Morris is survived by his partner of 17 years and later spouse, Jeff Murphy, of Croton, his mother, Rachel Morris of Glen Cove, a sister, Linda Lang of Manhattan, numerous loving nieces and nephews, and countless friends. 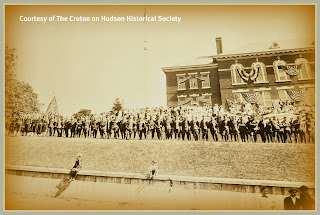 Continuing our popular "Croton Memories" series into 2012: A CROTON WELCOME HOME: World War I - To the right (click on the photo) is the village welcoming reception for returning soldiers from WWI; the building shown is what was then the Croton High School, now the village municipal building. You can see another photo of returning Croton WWI veterans Patrick Deery, Michael Rizzuto, John Boyle, John Manning, Allan Boyle, John Reilly, & James Sullivan at this link: http://www.flickr.com/photos/22283683@N07/6759623959/in/photostream
Posted by Editor at 10:15 AM 3 comments: 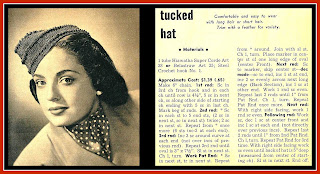 CALLING ALL CROTON KNITTERS: Continuing our new series here at EverythingCroton: THE VINTAGE KNITTER! - We got the idea when Hallie Flanagan Wolfe of hallieflanaganwolfegardens.com, recently donated a small cache of dogeared but very interesting vintage knitting and crochet magazines from the 1940's through the 1960's. Some of these patterns are simply gorgeous! Our sixth installment is for a mid-century crochet project: the “Tucked Hat”. Click on the photo for instructions and print. Thanks again Hallie! Feel free to share!