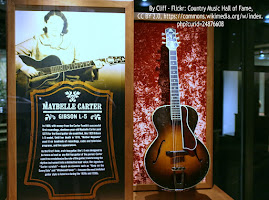 Who died this date in 1978, an American country musician. She is best known as a member of the historic Carter Family act in the 1920s and 1930s and also as a member of Mother Maybelle and the Carter Sisters. "Perhaps the most remarkable of Maybelle's many talents was her skill as a guitarist. She revolutionized the instrument's role by developing a style in which she played melody lines on the bass strings with her thumb while rhythmically strumming with her fingers. Her innovative technique, to this day known as the Carter Scratch, influenced the guitar's shift from rhythm to lead instrument. — Holly George-Warren".  CLICK ON THE PHOTO.  SEE AN EARLY VIDEO HERE.