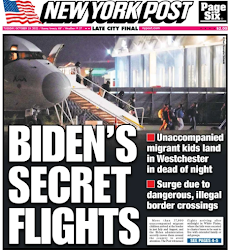 Planeloads of underage migrants are being flown secretly into suburban New York in an effort by President Biden’s administration to quietly resettle them across the region, The Post has learned.

The charter flights originate in Texas, where the ongoing border crisis has overwhelmed local immigration officials, and have been underway since at least August, according to sources familiar with the matter.

Last week, The Post saw two planes land at the Westchester County Airport, where most of the passengers who got off appeared to be children and teens, with a small portion appearing to be men in their 20s.

AND AS PREVIOUSLY REPORTED IN MID AUGUST FROM NEWS 12:

NEWS 12: ASTORINO BREAKS NEWS-HHS FLYING "HUNDREDS OF UNDOCUMENTED IMMIGRANTS TO WESTCHESTER AIRPORT", LATIMER CONFIRMS IT---Former Westchester County Executive and gubernatorial hopeful Rob Astorino says that the Department of Health and Human Services has been flying hundreds of undocumented immigrants into Westchester County Airport. Astorino wrote on his Twitter feed: "Hundreds of undocumented immigrants from {the} crisis at {the} border flown in on several nights. Why was this a secret? Where are they being resettled? Who is paying? Have they been tested for COVID?"...............Latimer says he just learned about this roughly 48 hours ago. Latimer says when he knows more he will share the information. MORE AT https://bronx.news12.com/astorino-hhs-flying-hundreds-of-undocumented-immigrants-to-westchester-airport