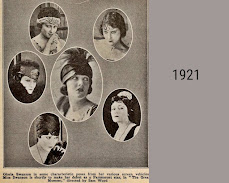 As many of you know, Gloria Swanson was one of Croton's most notable residents.  She lived for a number of years in a home and twenty acre estate on Mt. Airy Road. The home still stands today.  You can read and see more about Swanson's time in Croton by clicking here. 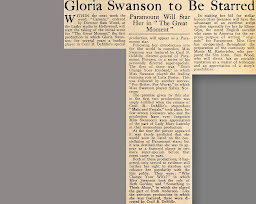 Your editor recently came across this vintage movie magazine article on the 1921 silent film, The Great Moment--click on the photos and links.

Directed by Sam Wood and starring Gloria Swanson, Alec B. Francis, and Milton Sills, the film is now considered lost though a fragment exists and is preserved at the BFI National Archive.

The story was by Elinor Glyn (née Sutherland; 17 October 1864 – 23 September 1943)--a British novelist and scriptwriter whose specialty was romantic fiction, which was considered scandalous for its time, although her works are relatively tame by modern standards. She popularized the concept of the It-girl, and had tremendous influence on early 20th-century popular culture and, possibly, on the careers of notable Hollywood stars such as Rudolph Valentino, Gloria Swanson and, especially, Clara Bow.  Read more about GLYN at https://en.wikipedia.org/wiki/Elinor_Glyn 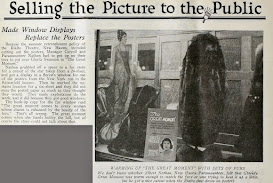 You can read more about THE GREAT MOMENT here.

Swanson would star with Valentino in another Elinor Glyn piece called BEYOND THE ROCKS in 1922. You can read more about that here.

YOU MAY ALSO ENJOY...A LITTLE SILENT FILM HISTORY: THE CROTON CONNECTION https://everythingcroton.blogspot.com/2019/08/a-little-silent-film-history-croton.html
Posted by Editor at 7:01 AM