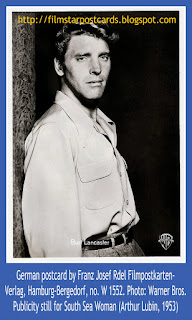 Who died this date in 1994---with a link from one of our favorite blogs ever, EUROPEAN FILM STAR POSTCARDS:

IMPORTED FROM THE USA: BURT LANCASTER - Fame came to Burt Lancaster (1913-1994) with his first film role, as the doomed Swede in Universal's The Killers (1946), but the former circus acrobat knew better than to leave his career in other hands. After less than two years in Hollywood, Lancaster formed his own production company and took the lead in such popular successes as the Technicolor swashbucklers The Flame and the Arrow (1950) and The Crimson Pirate (1952), and the Western Vera Cruz (1954). The athletic and handsome Lancaster remained a box office draw for 20 years, winning a 1961 Academy Award for playing the corrupt evangelist Elmer Gantry (1960). CLICK ON THE PHOTO, THEN READ MUCH MORE HERE

You may also enjoy:

--IL GATTOPARDO, THE LEOPARD https://everythingcroton.blogspot.com/2020/05/on-this-date-in-1963-leopardil.html
Posted by Editor at 4:33 AM