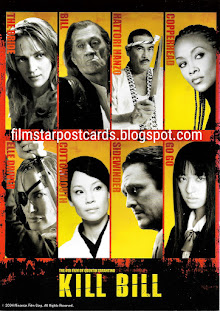 With the latest calls to cancel yet another film--Quentin Tarantino's Kill Bill--this post from our friends at European Film Star Postcards is very timely indeed.

Full disclosure: We love Kill Bill 1 and 2---but Tarantino's films are not for everyone.

The two-part American martial arts film Kill Bill: Volume 1 (Quentin Tarantino, 2003-2004) stars Uma Thurman as the Bride (code name Black Mamba), a former member of a team of assassins, the Deadly Viper Assassination Squad, described as "the deadliest woman in the world". She swears revenge on the Deadly Viper Assassination Squad (Lucy Liu, Michael Madsen, Daryl Hannah, and Vivica A. Fox) and their leader, Bill (David Carradine), after they try to kill her and her unborn child. Her journey takes her to Tokyo, where she battles the yakuza. READ AND SEE MUCH MORE AT https://filmstarpostcards.blogspot.com/2021/10/kill-bill-2003-2004.html