SOME ITEMS IN THE NEWS YOU MAY HAVE MISSED 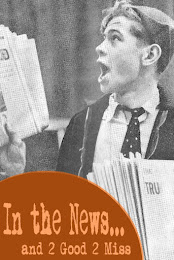 As always, please do your own due diligence---assorted sources:

--Traditional Irish music.  One of the best.  Many thanks to Croton's Tom Faranda's Folly for the info--RIP PADDY MALONEY: MORE HERE

Virginia board member resigns amid handling of sex assault claims

A Virginia school superintendent apologized and a board member resigned on Friday as the suburban district faces fiery backlash over its handling of sexual assault claims at two high schools.

Loudoun County School Superintendent Scott Ziegler had denied at a June meeting that there were any records of incidents in any schools’ restrooms despite a furious district father’s claim his daughter was attacked in the girl’s bathroom by a boy “wearing a skirt.”

The accused attacker was charged after that incident but assaulted another girl in an empty classroom after he was transferred to another high school, parents said.  “First, let me say to the families and students involved — my heart aches for you and I am sorry that we failed to provide the safe, welcoming, and affirming environment that we aspire to provide,” Ziegler said at a news conference on Friday.  His comments in June stemmed from a misunderstanding and recent events are leading to the district reviewing its policies for a potential overhaul, he claimed.

“I regret that my comments were misleading and I apologize for the distress that error caused families,” Ziegler said. “I will do better in the future.”

Parent Scott Smith was arrested in a viral video of the June 22 school district meeting when he was confronting officials over an attack on his daughter in the Stone Bridge High School bathroom on May 28. The county sheriff’s office confirmed it arrested a 14-year-old boy on two counts of forced sodomy at that location and that date, but didn’t confirm details such as if the assault happened in the restroom. A news release didn’t include the accused’s name because of his age. MORE AT https://nypost.com/2021/10/15/virginia-board-member-resigns-amid-handling-of-sex-assault-claim/

--MORE RACIAL EQUITY, ABOLISH SAT SCORES! The announcement stems from the NCAA’s Plan to Advance Racial Equity, which includes eight proposals to ‘address racial justice and equity at the national office and among the membership.’. MORE HERE

---Your money?  Yellen says IRS rule requiring banks to report all transactions over $600...calling the collection of information “routine,” after taking heat for the idea that is widely seen as an unprecedented invasion of privacy. MORE HERE

-- RIVER JOURNAL, A REPORT ON THE 2021 BLAZE AND A STOP IN BAKED BY SUSAN TOO; MORE HERE

--ASSORTED LETTERS TO THE EDITOR, A RE-CAP SERIES HERE AT EVERYTHING CROTON #1 AND 2  https://everythingcroton.blogspot.com/2021/10/a-periodic-re-cap-of-some-recent.html

And in case you missed it: BREAKING NEWS: FRANCIS COLLINS, NIH, DIRECTOR, RESIGNS AFTER GAIN OF FUNCTION FALSEHOOD EXPOSED, COVI.D.....DR WEAR A MASK INSIDE WITH KIDS---RESIGNS....Francis Collins, director of the National Institutes of Health (NIH), announced his resignation....just weeks after documents exposed that he made “untruthful” comments about U.S. federal funding of gain-of-function research at Wuhan...READ MORE AT https://www.breitbart.com/politics/2021/10/04/report-francis-collins-nih-director-resign-coronavirus-pandemic/ (NO WORD YET ON DR. FAUCI)

AND FROM NBC NEWS  https://www.nbcnews.com/politics/politics-news/nih-director-francis-collins-step-end-year-rcna2590

AND FROM AUGUST AND SEPT.

---GOTHAMIST, The blog has received numerous comments about incorrect info and the CDC pertaining to masks that has been published on a local  church site.  Once again...this CDC "guidance" does NOT apply to Westchester at present---of course this can change:

IN THE NEWS: WESTCHESTER NOT AT CDC MASK AGAIN LEVEL BUT ALL OF NYC IS--MORE HERE.

---BLM IN THE NEWS, THREATENS SENATOR--Confirmed in multiple media sources. Black Lives Matter is giving a Rhode Island senator an ultimatum to cut all ties with a controversial country club accused of only admitting white people — even though he has already denied being a member. BLM Rhode Island told WLNE that Democrat Sheldon Whitehouse has until next Friday to either resign or cut ties with Newport-based Bailey’s Beach Club — or it will make his life miserable, the station said. “We’ll go to his club, we’ll go to his office, we’ll go to his home — wherever we need to go,” one of the chapter’s directors, Mark Fisher, vowed.....The threat comes more than a month after the state’s junior senator denied being a member of the controversial club, and insisted it was not his place to force family members to quit. MORE AT https://nypost.com/2021/07/29/blm-gives-senator-a-deal-to-cut-ties-with-all-white-country-club/