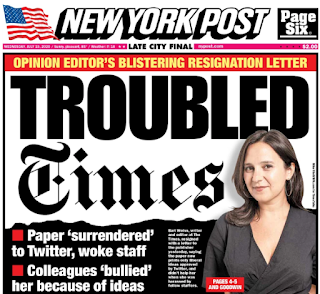 #1--Why New York Times praises ‘cancel culture’ but skips over its own racist history: Goodwin..... i n a recent article about Mount Rushmore, The New York Times said of George Washington, Thomas Jefferson, Abraham Lincoln and Teddy Roosevelt that “each of these titans of American history has a complicated legacy.”.... EXCERPTED.... AS ALWAYS, READ THE ENTIRE, LENGTHY AND DETAILED ARTICLE AT THE LINK BELOW.....

There was little in the story that was remarkable, and that was the point. The Times, as the chief media cheerleader for the chaos unfolding across the nation, routinely eviscerates America’s heroes, its culture and, through the paper’s 1619 Project, its founding.....Yet the Times has never applied to its own history the standards it uses to demonize others. If it did, reporters there would learn that the Ochs-Sulzberger family that has owned and run the paper for 125 years has a “complicated legacy” of its own. That legacy includes Confederates in the closet — men and at least one woman who supported the South and slavery during the Civil War. In fact, Times patriarch Adolph S. Ochs contributed money to the very Stone Mountain project and other Confederate memorials the Times now finds so objectionable. READ MORE AT https://nypost.com/2020/07/11/ny-times-praises-cancel-culture-but-skips-its-own-racist-history-goodwin/

#2--TOM FARANDA'S FOLLY---The NY Times editor's resignation letter- Not that we didn't know what Bari Weiss confirms - but she does confirm it. Way back when I was a senior in high school and taking AP European History, our (excellent) teacher Fr. Thomas Shelley said "At this stage you need to start reading the NY Times. Just don't believe everything they say in it." And now over 50 years later, so much of the NYT is simply leftist/progressive cant. As one of my kids said, "It's not just a bunch of campus crazies - they've grow up and are at the Times." ....Bottom line: Read the Wall Street Journal --- WEISS'S LETTER

It is with sadness that I write to tell you that I am resigning from The New York Times.

I joined the paper with gratitude and optimism three years ago. I was hired with the goal of bringing in voices that would not otherwise appear in your pages: first-time writers, centrists, conservatives and others who would not naturally think of The Times as their home. The reason for this effort was clear: The paper’s failure to anticipate the outcome of the 2016 election meant that it didn’t have a firm grasp of the country it covers. Dean Baquet and others have admitted as much on various occasions. The priority in Opinion was to help redress that critical shortcoming. MORE AT https://tomfaranda.typepad.com/folly/2020/07/the-ny-times-editors-resignation-letter-a-doozy.html

READ PART TWO OF OUR JOURNALISM SERIES HERE.
Posted by Editor at 10:46 AM