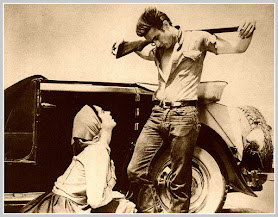 Who died this date in 1955...James Byron Dean (February 8, 1931 - September 30, 1955) was an American actor.  He is a cultural icon of teenage disillusionment and social estrangement, as expressed in the title of his most celebrated film, Rebel Without a Cause (1955), in which he starred as troubled teenager Jim Stark. The other two roles that defined his stardom were loner Cal Trask in East of Eden (1955) and surly ranch hand Jett Rink in Giant (1956)--click on the photo. Dean's enduring fame and popularity rest on his performances in only these three films. READ MORE HERE https://en.wikipedia.org/wiki/James_Dean

SEE A FABULOUS POST ABOUT DEAN FROM OUR FRIENDS AT EUROPEAN FILM STAR POSTCARDS AT https://filmstarpostcards.blogspot.com/2018/03/james-dean.html

AND ALSO DIED ON THIS DATE: THE AMAZING SIMONE SIGNORET https://everythingcroton.blogspot.com/2019/09/remembering-amazing-simone-signoret.html