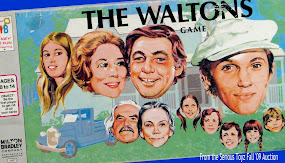 ON THIS DATE IN 1972 "The Waltons" TV program premiered on CBS starring Richard Thomas and Ralph Waite.

The Waltons was an American television series created by Earl Hamner Jr., based on his book Spencer's Mountain and a 1963 film of the same name, about a family in rural Virginia during the Great Depression and World War II. Read more here.

Click on the vintage 1970's board game, featured in a previous auction at SeriousToyz.