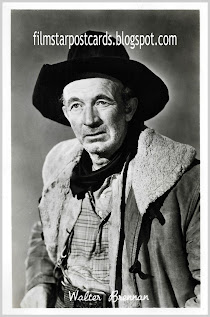 An American actor who won the Academy Award for Best Supporting Actor in 1936, 1938, and 1940, making him one of only three male actors to win three Academy Awards.

Film historians and critics have long regarded Brennan as one of the finest character actors in motion picture history.

CLICK ON THE PHOTO COURTESY OF OUR FRIENDS AT EFSP--a Dutch postcard of Brennan discovered at the 2017 international Collector's Fair.