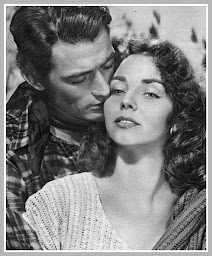 Who died on this date in 2009...Jennifer Jones (March 2, 1919 – December 17, 2009), also known as Jennifer Jones Simon, was an American actress during the Hollywood golden years. Jones, who won the Academy Award for Best Actress for her performance in The Song of Bernadette (1943), was also Academy Award-nominated for her performances in four other films.  READ MORE HERE http://bit.ly/2hbzLnM

CLICK ON THE PHOTO TO SEE JONES AND GREGORY PECK IN "DUEL IN THE SUN.

Jones was also fantastic in PORTRAIT OF JENNIE, LOVE IS A MANY-SPLENDORED THING, and SINCE YOU WENT AWAY.