ON THIS DATE IN 1964, GOLDFINGER PREMIERED IN LONDON 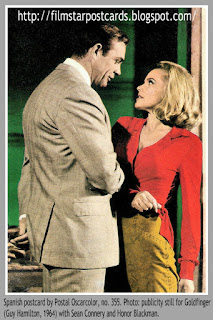 And now a really great post from our friends @ EUROPEAN FILM STAR POSTCARDS--all about GOLDFINGER (1964), with Sean Connery at his best as James Bond. (Click on the photo to see a Spanish postcard with Connery and the very stylish Honor Blackman.) TRIGGER ALERT! GO NO FURTHER IF YOU'RE OFFENDED BY 007 TYPES AND THE WOMEN WHO LOVE THEM, LOL!

"Goldfinger (Guy Hamilton, 1964) is the quintessential episode in the James Bond series, filled with thrills, girls and danger. It was the third episode and the third to star suave and ultra-cool Sean Connery as agent 007. Everything seemed to be right, the stunts, the sets, the score, the gadgets, and a wonderful cast."  Read--and see--much more AT

And how about the great Shirley Bassey singing the title song:
https://www.youtube.com/watch?v=6D1nK7q2i8I