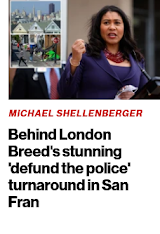 After Black Lives Matter protesters last year demanded that cities “Defund the Police,” San Francisco Mayor London Breed held a press conference to announce that her city would be one of the first to do exactly that. Breed cut $120 million from the budgets of both San Francisco’s police and sheriff’s departments. A spokesperson for the police officers’ union warned the cuts “could impact our ability to respond to emergencies.”  This week, Breed reversed herself in dramatic fashion, announcing that she was making an emergency request to the city’s Board of Supervisors for more money for the police to support a crackdown on crime, including open-air drug dealing, car break-ins and retail theft.  READ AND SEE MORE OF THIS VERY DETAILED ARTICLE AT https://nypost.com/2021/12/15/behind-london-breeds-defund-the-police-turnaround-in-san-francisco/

ABC NEWS: Video shows decimated San Francisco Louis Vuitton store after massive smash-and-grab robbery--Video shows the chaos that ensued in Union Square.Multiple suspects have been arrested after a Louis Vuitton store in San Francisco was hit by thieves. Social media video shows some of the chaos that has unfolded there tonight - smashed store windows, police and people running in the street. TRIGGER ALERT https://abc7news.com/louis-vuitton-looted-union-square-robbery-san-francisco/11256032/

IN CASE YOU MISSED IT---THREE STORIES; THE CONTINUED DECLINE OF SAN FRANCISCO, one of our formerly favorite cities:

#2 WALGREENS---Last week, after Walgreens announced that five additional outlets in San Francisco would be closing on top of the 17 that already have been shuttered since 2019, the company claimed that changes in both the law and prosecutor attitudes had made it impossible to run a profitable business in the city.  READ MORE FROM THE CALIFORNIA GLOBE HERE.