NEW FROM OUR FRIENDS AT EFSP: DEANNA DURBIN 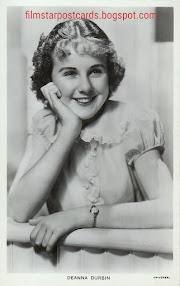 New from our friends at European Film Star Postcards...

Deanna Durbin was born in 1921, one hundred years ago. With her beautiful singing voice and her charm, she became a very popular star all over the world. She was one of the few child performers whose transition to adulthood was successfully accomplished. But, as years went by, she grew dissatisfied with the 'Deanna Durbin' image Hollywood had created and by the increasingly poor material which was offered to her, especially at the end of her career. She then choose to retire and never reconsidered her decision.

READ AND SEE MUCH MORE AT  https://filmstarpostcards.blogspot.com/2021/12/la-collectionneuse-deanna-durbin.html