As many of you know, Gloria Swanson was one of Croton's most notable residents (her home was on Mt. Airy--you can read more about that here.) 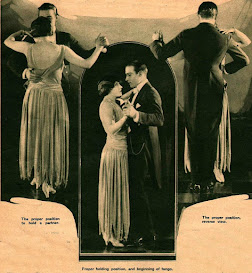 So we were pretty excited when we discovered this 1922 "tango" lesson featuring Swanson and Valentino in a recent vintage magazine haul from the Peekskill Attic Treasures Flea Market.

For those who don't know, Valentino and Swanson starred in BEYOND THE ROCKS--based on a 1906 novel by Elinor Glyn. The novel was later adapted into the silent film with Swanson and Valentino (credited as Rodolph Valentino).  The film was directed by Sam Wood and distributed by Paramount Pictures.

Elinor Glyn was a British novelist and scriptwriter who specialised in romantic fiction, which was considered scandalous for its time, although her works are relatively tame by modern standards. She popularized the concept of the It-girl, and had tremendous influence on early 20th-century popular culture and, possibly, on the careers of notable Hollywood stars such as Rudolph Valentino, Gloria Swanson and, especially, Clara Bow.

More from Wikipedia on BEYOND THE ROCKS---The novel's title comes from a conversation in Chapter 4 about the nature of Fate, where the main character expresses belief that "if one does one's best some kind angel will guide one's bark [on the river of life] past the rocks and safely into the smooth waters of the pool beyond." Frequently thereafter, the characters long for angels who will steer them "beyond the rocks."  CLICK HERE FOR MORE ABOUT THE FILM.

Note: All content on this blog is Copyright (c) by Maria Cudequest and by the posters who have contributed specific content. All material is for your personal use only. No content or photos may be republished or sold, without prior written consent from your editor and the individual who contributed the content in question. For permissions or questions about this policy, please contact the editor.
Posted by Editor at 9:33 PM