UPDATED: HUNDREDS OF AMERICANS LEFT BEHIND

In announcing that the United States has officially ended its military presence in Afghanistan, hours before President Joe Biden’s Aug. 31 deadline, U.S. Central Command (CENTCOM) head Gen. Frank McKenzie said that there are still Americans who remain in Afghanistan “in the low hundreds.”

He made the remarks during a televised address in response to a reporter’s question, adding that the military and State Department will work to evacuate those individuals.

“There’s a lot of heartbreak associated with this departure. We did not get everybody out that we wanted to get out,” said McKenzie, adding that it is a “tough situation.” READ MORE HERE 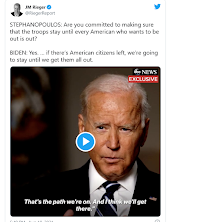 PRAYERS FOR THE MEN, WOMEN AND CHILDREN LEFT BEHIND

UPDATED 9/5; PLANES NOT BEING ALLOWED TO LEAVE  https://nypost.com/2021/09/05/taliban-holding-6-us-flights-hostage-in-afghanistan-rep-mccaul/