IN THE NEWS: CHARGES AGAINST HUNDREDS OF NYC RIOTERS, LOOTERS, DROPPED

Hundreds of people arrested for looting and rioting across the Big Apple last year in the wake of George Floyd’s police-involved death have had their charges dropped, according to an analysis of NYPD data — figures ripped as “disgusting” by local business owners.  In the Bronx — which saw fires in the street and mass looting last June — more than 60 percent have had charges dropped, according to the investigation by NBC New York. SEE MORE HERE. 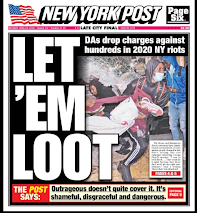 Our prosecutors are imperiling us By Post Editorial Board

What to say about the Bronx and Manhattan district attorneys throwing out most of the looting and vandalism cases from the wake of the George Floyd protests last year? Outrageous doesn’t quite cover it. Shameful, disgraceful, disgusting, as local businesses put it. All true. But above all else, these sorts of games by our elected prosecutors are dangerous.