FOR THOSE OF OF US WITH FRIENDS & FAMILY LIVING IN/WORKING IN....NYC...MORE RIOTS, PROTESTS, ANTI-POLICE, CRIME, WHATEVER, ETC.

Chaos in Manhattan: Mob run riot again in Washington Square Park and party promoter behind out-of-control raves tells fed-up residents to LEAVE if they don't like them

The landmark park has been plagued by noisy parties with complaints becoming so bad the NYPD imposed a 10 p.m. curfew two weeks ago that lifted Saturday....On Saturday a walker was beaten and mugged of his phone, two people were knifed in a brawl, and a 77 year-old cook had his head gashed open....The park has been described by the New York Post as 'ground zero for the city's descent into crime and chaos'....Regular rave organizer David 'Shaman' Ortiz, 28, - who lives in Queens - has since dismissed his critics as 'Karens and Kevins' who want to 'steal joy'......In a recent Instagram story, Ortiz also referred to the NYPD as 'the biggest gang in New York'....MORE HERE 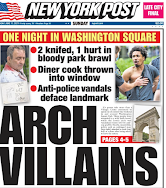 NY POST.....Violence continued to spiral out of control on Saturday in and around Washington Square Park, where anti-cop graffiti was scrawled on its arch, a man was beaten and robbed of his cellphone, two others knifed in a wild brawl and an elderly cook left bloodied after a vicious morning attack at a neighborhood diner.