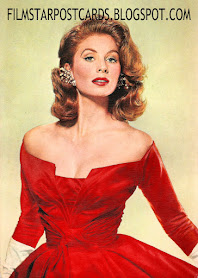 A fab old post from our friends at European Film Star Postcards:

American model and actress Suzy Parker (1932–2003) was known in the 1950s as the most photographed woman in the world and is now considered as the very first Supermodel. The red-headed beauty defined glamour in the 1950s and in 1956, at the height of her modelling career, became the first model to earn $100,000 per year. During the late 1950s and early 1960s, Parker also became the glamorous star of several Hollywood productions. READ AND SEE MORE HERE.

Note: All content on this blog is Copyright (c) by Maria Cudequest and by the posters who have contributed specific content. All material is for your personal use only. No content or photos may be republished or sold, without prior written from your editor and the individual who contributed the conten