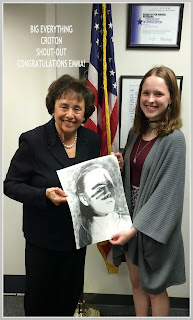 “I congratulate Emma on winning this year’s Congressional Art Competition,” said Lowey. “New York’s 17th Congressional District will be well represented in Washington, DC, by her outstanding artwork on display in the United States Capitol, where millions of visitors will be able to see it.”

“The Croton-Harmon School District and Croton Community couldn’t be more proud and excited for Emma. Her portrait is a wonderful representation of her amazing technical ability, creative spirit and dedication to her art,” said Croton-Harmon Art Teacher Jodi Burger. “We appreciate the efforts of Congresswoman Nita Lowey’s office in recognizing high school artists, and join in celebrating Emma, whose commitment to the field of visual arts has been evident throughout her time in the Croton schools. She is a gem!”

“Our region is fortunate to be home to so many excellent young artists,” said Lowey. “I’m proud of Heeyeon, Alice, Barbara, and all of the participants in this year’s Congressional Art Competition. Their artistic talents are excellent contributions to the Lower Hudson Valley’s cultural identity.”

The Congressional Art Competition is a nationwide high school visual art competition to recognize and encourage artistic talent in the nation and in each congressional district. Each spring, students submit entries to their representative’s office, and panels of district artists select the winning entries. Winners are recognized both in their district and at an annual awards ceremony in June in Washington, DC. The winning works are displayed for one year at the U.S. Capitol.

In addition to promoting arts through the annual Congressional Art Competition, Congresswoman Lowey has been stalwart in her defense of the National Endowment for the Arts (NEA) and served on the prestigious National Council for the Arts in recognition of her leadership.
Posted by Editor at 12:29 PM