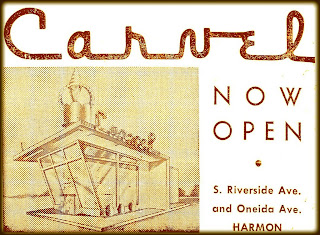 Editor's Note: We’ve had a special request for this one from John and Katy L—former Croton residents now living in Las Vegas. We’re happy to oblige.

INTRODUCING CROTON MEMORIES, a new series that will focus on Croton from the 1940's through the 1970's. Fifth installment: CARVEL ICE CREAM--With special thanks to The Croton Historical Society - Long before there was a Purple Monkey or a Blue Pig, Carvel Ice Cream had a presence in the Harmon section of the village. Opened in the late 1950’s, its glass and steel “modern” style structure--with boomerang imprinted counters in pale ivory and turquoise--beckoned residents with soft-serve ice cream, “brown bonnets”, and flying saucers. (Click the photo) Then as now, many a birthday party table featured a Carvel ice cream cake although we’ve been told that “Fudgie the Whale” did not make his first appearance until the mid-1960’s.

It seems that Carvel also held an annual Strawberry Festival in September and if you were lucky enough, you were served by The Carvel Twins themselves. (Click the link: http://www.flickr.com/photos/22283683@N07/6080998166/in/photostream)

One resident told us that she had her first real job at Carvel and became so addicted to their Mint Chocolate Chip that she gained six pounds in one week. Another fondly recalled how she was serenaded a-cappella by a boy and his brothers in the parking lot until she finally agreed to go out with him. They were married a year later. (In fact John and Katy are celebrating their anniversary tonight and asked to “see the old place again”.)

The former Carvel site--which was also known as Croton Creamy a.k.a. Creamee later--is now the home of Umami Restaurant and the building has been extensively altered. Gone are those quintessential 1950’s “lines” that made mid-century modern architecture so interesting. Stay tuned for more Croton Memories.