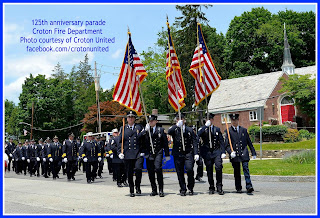 
Many thanks to the volunteer photographers and videographer from Croton United who made this commemorative parade tribute possible. Croton United is a bipartisan community organization—not a political party—made up of Democrats, Republicans and Independents who believe that national parties and partisanship have no role in local village government.


In addition to focusing only on village issues—with the goal of doing what’s best for all village residents—they also take great pride in showcasing the special events, local civic organizations and businesses that make Croton such a great place to live and work.

And...photos sent in by residents: Croton Fire Dept 125th Anniversary Parade -- Residents say Thanks
These are some photos taken by residents at today’s parade. And also much thanks to Village Manager Janine King, DPW Superintendent Frank Balbi, Police Chief Anthony Tramaglini and all the Village of Croton on Hudson employees who worked so hard to make this a day to remember! https://www.facebook.com/crotonunited/posts/805545552935811
Posted by Editor at 5:34 AM