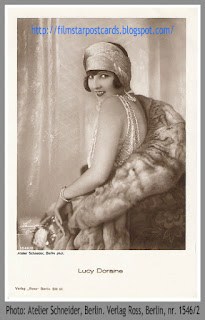 New from our friends at European Film Star Postcards: Lucy Doraine - click on the photo....

In spite of her French name, Lucy Doraine (1898-1989) was a Hungarian actress and a major star of the Austrian and German cinema in the 1920s. When she moved to Hollywood, the revolution of the sound film finished her career.

After the fall of Bela Kun’s Republic and because of the turmoils of 1918-1919, Mihaly and Ilonka Kertesz fled Hungary and took up refuge in Vienna. There they both got a contract by count Kolowrat, the owner of Sascha Film.

READ MORE HERE http://filmstarpostcards.blogspot.com/2016/12/lucy-doraine.html
Posted by Editor at 5:22 AM